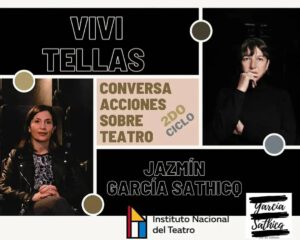 Vivi Tellas in CONVERSE-ACTIONS ON THEATER, with Jazmín García Sathicq. With INT’s support for group activity 2021

Vivi Tellas, theater director and curator with great influence on the Argentine scene. Distinguished with the Belknap Fellow by the Humanities Council of Princeton University (2014) and named Outstanding Personality of Culture by the Legislature of the Autonomous City of Buenos Aires (2015). She is the creator of Biodrama, a revolutionary project on stage biographies. The search for theatricality outside the theater has become the center of his work. His unique conception of documentary theater has led to a series of live archives with non-professional performers (My Mom and My Aunt, Three Philosophers with Mustaches, Cozarinsky and His Doctor, Driving School, Women Guide and Disc Jockey) and other works such as Rabbi Rabino (New York), O Rabino e seu Filho (San Pablo), The witch and her daughter, Maruja in love, The people (a massive play with employees of the San Martín Theater), The Rieznik child and The friends. An afro biodrama. Some highlights from her previous career as a theater director include a production of John Cage’s Europera V in the main hall of the Teatro Colón. As well as a production of La casa de Bernarda Alba by Federico García Lorca, made in collaboration with Guillermo Kuitca in the Martín Coronado Room of the San Martín Theater. Also recognized are her Malo Theater projects, with which she began her directing career, and the Museums Project, with which she paved the way for theatrical curatorship by being director of the Experimentation Center of the Ricardo Rojas Cultural Center, University of Buenos Aires-UBA .
In 2009 she was visiting professor in the Creative Writing program at New York University (NYU) and in 2014 at DasArts Master’s Program, Amsterdam. Since 2016 she has been a professor at the Dramaturgy Postgraduate Program at the National University of the Arts. His works and seminars have toured London, Havana, Madrid, São Paulo, Dublin, Guadalajara, Vancouver, Bogotá and Barcelona, ​​among other cities, as well as s As