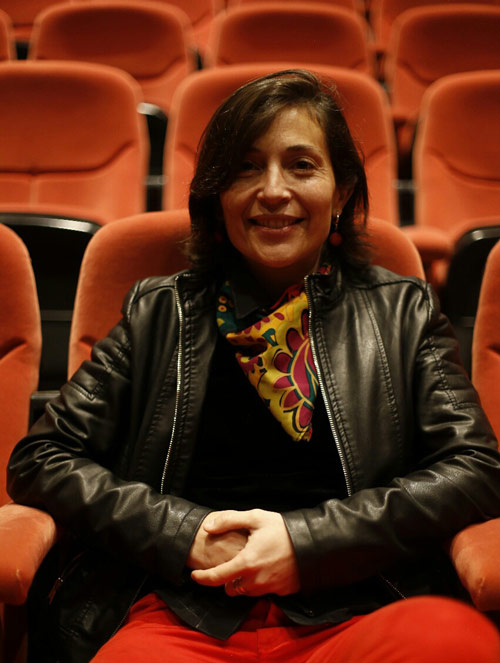 Playwright, Artistic Director, dedicated to research in new scenic languages. Developing her creative and research work she has mounted more than 20 theatrical works, as a playwright and director, and has directed dramatic texts by Argentine dramatic authors.

He obtained the Grant for the Creation of the National Fund for the Arts (2018). The La Plata Theater Research Center Grant at the European Scuola di Teatro e Cinema di Milano, Italy (2001) for studies of Dramaturgy, Directing, Acting, Training and Language of the Actor’s Body. Awarded by the “European Scquola di Teatro e Cinema di Milano”, Milan, Italy, for the 2001/02 and 2002/03 cycles. Director: Renzo Casali.

She currently works as Deputy Director of the La Plata Theater School, a public school of higher artistic education of the D.G.C.E. of the Province of Buenos Aires.

Professor of the chair “Organization and Management of the Theatrical Show” (since 2004), in the career of “Technique in Acting”, La Plata Theater School.

As a theater teacher he has given workshops, trainings and programs in Acting, acting training, Dramaturgy, Production and management of the show and Direction, convened by the public sector for the Municipal Theater of the City of Verónica, Punta Indio (2011), the National Theater Institute, La Comedia de la Prov. De Buenos Aires, in the National Training and Development Program (From 2005 to 2007) And in the Training Subprogram, Artistic Department (2007 and 2008.) / Teacher Trainer as Technical Assistant of the Comedy of the Province of Bs As in the 20th Conference on Education through Art, Laprida (2008).

His works have received awards and mentions, and have toured national and international festivals.

Trained in Advanced Show Production, by Gustavo Schraier. He has conducted training in various aspects of the performing arts with theater masters such as Mauricio Kartún, Raúl Serrano, Josette Férral, Robert Wilson, Beatriz Catani, Gustavo Vallejos, among others.

Creator and Artistic Director of the “Compañía Sapucay Teatro”, where she has written and directed her plays from 2003 to 2019. Having mounted more than 20 plays as a playwright and director.

Creator and Artistic Director of the “García Sathicq Company” (Year 2020) where she continues to develop her creative and research work.