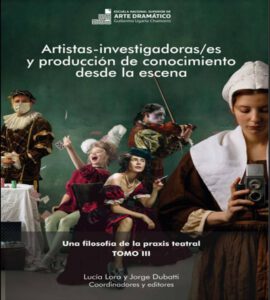 Participation in the book “Artists-researchers and production of knowledge from the scene. A philosophy of theatrical praxis TOMO III “, Edited by the Escuela Nacional Superior de Arte Dramático “Guillermo Ugarte Chamorro” and the Ensad Editorial Fund, from Peru.
Coordinators and editors: Lucía Lora and Jorge Dubatti

Editorial INTeatro published the play “The heavens above” by Jazmín García Sathicq. The new volume of the collection “The theatrical country” of the editorial of the National Theater Institute is dedicated to the work of the actress, teacher and playwright García Sathicq. Access link: https://inteatro.ar/novedades/los-cielos-encima/ INT free download link: http://inteatro.gob.ar/Files/Publicaciones/2276/LOS%20CIELOSweb%20(1).pdf

Works: THE ARROGANCE OF THE STONE / THE SKIES ABOVE
Foreword by JORGE DUBATTI.

You can acquire it by writing to info@jazmingarciasathicq.com

In The Arrogance of the Stone, García Sathicq starts from a symbolist scenic matrix (theater as a symbol, metaphysical enunciation of the universe) from an “abstract space” whose representations are mutating, to give voice to the displaced and excluded, the poor, the silenced , the invisible ones, the “ghosts”, “the nobody”, the “orphans” expelled from the city, the “thrown into nothingness”, those who are the “mud” that covered the cement. Dystopian drama of reaction against neoliberalism and its consequences, construction of an absolutely unsatisfactory image of civilization, thus combining, in a very personal way, symbolism and the social, poetic and political perspective, against / against exclusion. Poetry and social denunciation, united by an ethics of otherness (E. Lévinas) and the revelation of Rodolfo Kusch’s “deep America”.

In The Skies Above, the story of Nigel, a fledgling 50-year-old writer, focuses on one of the evils that are at the root of social dystopia: fear, fears. In times of quarantine, Nigel’s “journey” is a phenomenology of others, of the pain and wonder of others, and at the same time itself, culminating in a liberating and creative transformation. The heavens above is an educational drama (theatrical version of the Bildungsroman) embodied by an adult woman who undertakes the first steps of a new life, the construction of an emerging and future worldview, of self-assertion. 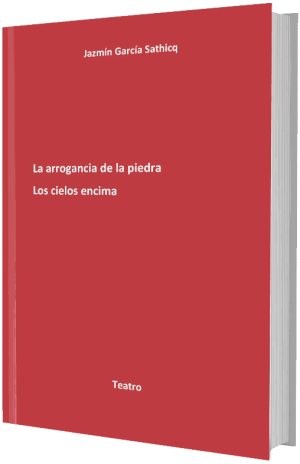