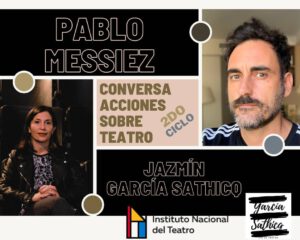 We return with the CONVERSE-ACTIONS ON THEATER cycle. Encounters with creators of the performing and performing arts. This year, the conversation will focus specifically on the modes of production in pandemic and the experiences carried out. 3rd meeting: Pablo Messiez in CONVERSE-ACTIONS ON THEATER, with Jazmín García Sathicq.
This activity has the support of the INT to the group activity “Cía. García Sathicq 2021”
Pablo Messiez was born in Buenos Aires in 1974. He made his debut in 2007 as a playwright and director of “Before”, a very free version of “Frankie and the wedding”, by Carson McCullers. Before “Before”, Messiez had been on stage for more than 20 years. He began studying acting at the age of 12. Among his teachers are Ricardo Bartís, Juan Carlos Gené and Rubén Szuchmacher, with whom he also studied conducting. He has performed for directors of the Argentine scene such as Leonor Manso, Cristián Drut, Rubén Szuchmacher and Daniel Suárez Marsal among others. In 2005 he was summoned by Daniel Veronese to participate in “A Drowning Man”, a version of “Three Sisters”, by Anton Chekhov, a show that was part of the Summer Festival at Lincoln Center in New York and the Tokyo International Arts Festival. “A man who is drowning” toured Spain in 2006 and returned in 2007, opening the season of the National Dramatic Center at the María Guerrero Theater in Madrid and performing at the Teatre Lliure in Barcelona. Messiez continued working with Daniel Veronese until he left Argentina in December 2008. In 2010 he premiered “Muda” (a work of his authorship with which he made two seasons at the Pradillo theater in Madrid). The Fernán Gómez Theater summoned him to inaugurate its new Sala Dos and produced “Now”, a new version of “Before”, re-released in January 2011. That same year, he premiered “Los ojos”, a new work of his authorship. In 2012 he premiered at the Autumn to Spring Festival “Las criadas”, an adaptation of the classic by Jean Genet. He also went on stage “Las Plantas” for the first edition of Fringe Madrid and was part of the cast of “Hamlet”, playing Horacio, under the baton of Will Keen. In addition, this same year, he directed Alberto San Juan in the stage reading of Samuel Beckett’s text, “Rumbo a Peor”. On the other hand, he has written the texts for the productions of Losdeade, a Chevy Muraday company, beginning his collaboration with “Return”, which was followed by “Ashes”, “In the desert” and “El cínico”.