CYCLE OF CONVERSE-ACTIONS ON THEATER 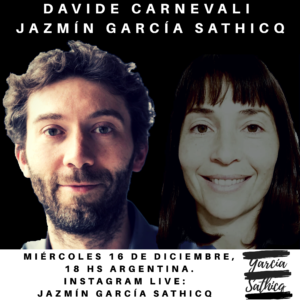 Jazmín García Sathicq organizes the Cycle of conversations-actions on THEATER. On the crossings, the frontiers of language with other disciplines and fields of knowledge, the new territories to investigate and create. With LUXURY GUESTS: 4th meeting with Davide Carnevali (Milan, Italy)

He is an author, theorist and translator. He is currently a resident artist at ERT Emilia Romagna Teatro

Nazionale and is part of the Committee of Lectors of the Teatre Nacional de Catalunya. Since 2014 it is

He has a doctorate in Performing Arts from the Autonomous University of Barcelona, ​​with a period of studies

at the Freie Universität Berlin. He teaches Dramaturgy and Theory at the Institut del Teatre de

Modena. He also gives workshops in different theaters and institutions. Be part of the council of

international publications, where he deals mainly with Latin American and German theater.

He has curated various editions in Italian by Spanish authors; He is also a translator from Spanish,

Catalan and French into Italian.

He has written, among others: Variazioni sul modello di Kraepelin (Theatertreffen Stückemarkt Prize

Shakespeare in una notte di mezza estate (ERT, 2019); since 2018 he writes and directs the Classroom

Plays, small-format shows that are played in schools, for an ERT project.

In 2018 he received the Hystrio alla Drammaturgia Award for his career as an author. He is director of

2020/21 academic year in the international project of the École des maîtres.

His works, translated into fifteen languages.